On this edition of the WLCU Youth #Community Talks we were joined by Sam Lahoud, founding chair of the Beirut Film Society, to discuss Lebanese filmmaking and the industry! 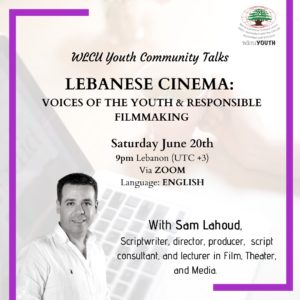 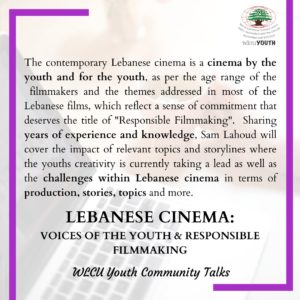 The contemporary Lebanese cinema is a cinema by the youth and for the youth, as per the age range of the filmmakers and the themes addressed in most of the Lebanese films, which reflect a sense of commitment that deserves the title of “Responsible Filmmaking”. Sharing years of experience and knowledge, Sam Lahoud will cover the impact of relevant topics and storylines where the youth’s creativity is currently taking a lead as well as the callenges within the Lebanese cinema in terms of production, stories, topics and more.

Sam Lahoud is a scriptwriter, a director, a producer, a script consultant, and a lecturer in Film, Theater, and Media. He started his career in Film and Theater in 1994, and since then he has written, directed and produced Theater Plays, Films and Documentaries, which received many national and international recognitions and awards; his first feature film “Waynon” (Void) was the Lebanese official submission for the Academy Awards 2015 (Oscars) for Best Foreign Language Film.
Sam is active in cross cultural productions, and is permanently working on different film projects. He is the Founding Chair of Beirut Film Society and Producer at Berytus Production and AV Nation. He is the Founding Director of Beirut International Women Film Festival, Beirut Shorts, NDU International Film Festival, Beirut International Children and Family Film Festival, the Lebanese Film Festival in Canada, the Golden Grenade Armenian Film Festival in Beirut, and many other film events.